(with many thanks to Modern Toss at the Guardian)

Ah yes … technology at its highest calling and delivering the best. A newspaper insert treated to indicate pregnancy if peed on. 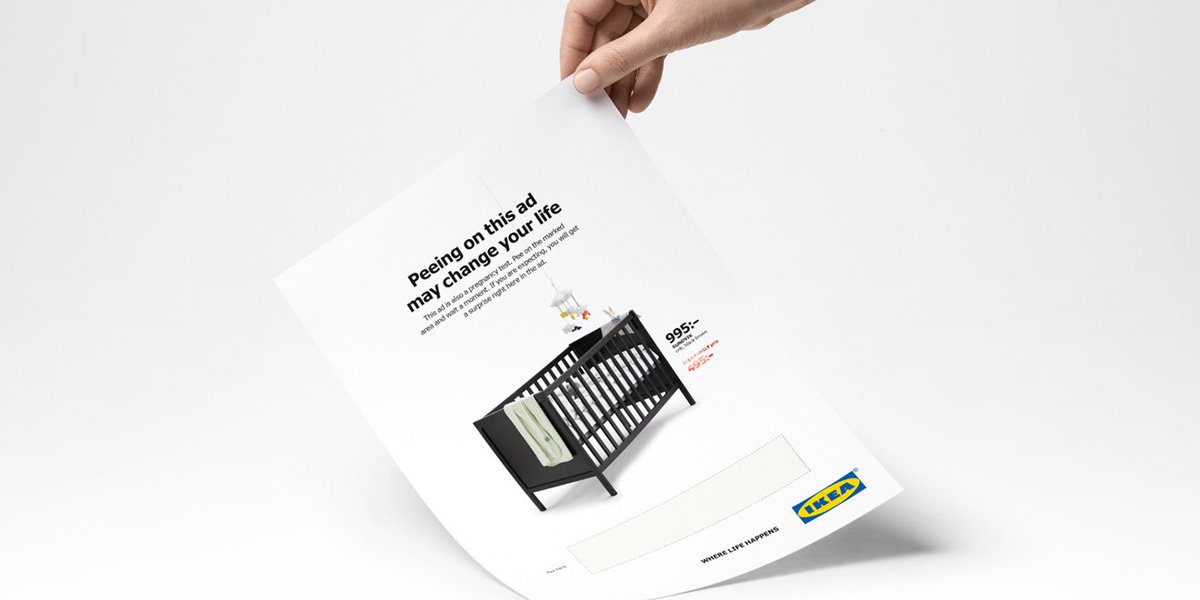 “Widdle here, get a discounted crib” is the pitch.

And … goes on to note the estimable Guardian … that they’re not even the first with this, er, novel — channel? tactic? END_OF_DOCUMENT_TOKEN_TO_BE_REPLACED

One of the other chaps made us aware of this little piece in the Guardian … shows how well he knows us … now filed under the cow pat in the top left field. That said – the click-through is worth it just for some of the images in the article.

It somehow reminded me of this @gapingvoid illustration.

Needless to say that the chaps believe that straight forward language is the only way …..

Don’t you think other chap?

Naturally – as they say in the olde alma mater …. a slight inclination of the cranium is as adequate as the movement of one optic towards an equine quadruped devoid of its visionary capabilities.

…does not mean one actually should. However…

While the Chaps are always appreciative of Great Leaps Forward, they also appreciate Great Leaps Sideways, or in some cases Great Standings Still. So it is with a sigh of relief from the other, more depressing technological high-jinks around at present that the Chaps greet the newest Ig Nobel Prizes. Or, as they style themselves, research that could not, and probably should not, be repeated.

There is also a Journal of Irreproducible Results–

but such things seems to have gone worryingly mainstream of late.

END_OF_DOCUMENT_TOKEN_TO_BE_REPLACED

This chap noted that something crazy is goin on …

Well, yes, there is that – but then it is a bit different, specifically …

Even this Chap, no historian he, knows that throughout history, rulers under threat at home have declared war abroad.

Great Movie – Wag The Dog. Doesn’t it seem so quaint and ‘pre history’ that a movie, although baked in satire, was all about the US going to war to cover up a sex scandal (I seem to recall that there was this chap Clinton that inspired it … but that’s another thing altogether.) Reminder, it is only twenty years ago that the movie was released.

But here is the thing. The ‘dossier’ which we started talking about a year ago … was published by Buzzfeed in January … and provided a source of such relentless humor as ‘even his showers are golden’ – was the subject just yesterday of a 10 hour session between the CEO of the company that did the work and Senate Judicuary investigators. The showers bit bearly got a mention – because it contains far, far worse stuff.

Sorry. Yes. Do.
… wanders away … stage left … muttering to self.

But this one flies in the face not just of sanity …

… but history. We Brits should know, and we can only look on in horror. END_OF_DOCUMENT_TOKEN_TO_BE_REPLACED

It was a wonderful event…

Or so this Chap heard, from someone who does not live at the base of a west-facing mountain.  He understands there are, oh, oodles of photographs from all one’s friends, who are dying to share them.

And yet, as this Guardian feature delicately points out, photographic enthusiasm may be little substitute for skill. Especially when the subject is, as here, just a little tricky and elusive… Still, better luck next time, what?

END_OF_DOCUMENT_TOKEN_TO_BE_REPLACED

Hey, it’s not like government has money to burn.

And just because we don’t live there doesn’t mean we don’t care.

END_OF_DOCUMENT_TOKEN_TO_BE_REPLACED

The Guardian’s diplomatic editor Patrick Wintour has reported that the US president told Theresa May in a phone call that he does not wish to go ahead with a state visit if large-scale protests will be held against him. BBC’s Joe Lynam added that Downing Street said there will be “no change” to plans for Trump to visit.

END_OF_DOCUMENT_TOKEN_TO_BE_REPLACED

“That is not dead that can eternal lie.”

Graham is concerned about Socrates …

… well, not Socrates exactly. But it starts with him.

Unexamined is one thing, but what if the exam already took place without our knowledge? This chap continues with the fear that if the Unexamined status were ended right now, he might actually fail…

Or considered another way — how much examination is enough, and how much too much? That thought was triggered by this quote … END_OF_DOCUMENT_TOKEN_TO_BE_REPLACED